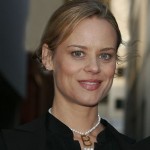 ACTOR Nadine Garner has turned her hand to film directing.

Garner has directed her first short film, Afterglow, an 11-minute period drama set in Kyneton. The film was a real family affair, with husband Cameron Barnett the film’s producer and director of photography.

Her mother and stepfather were also involved in the film.

Garner said last week that while hard work, the film was immensely satisfying, as it was her own project that she saw through from the beginning.

“After four years of doing television (City Homicide), I thought, ‘what a great way to finish off and do something for myself’,” she said.

The work has been intense, but Garner is excited with the result.

“There is so much with a short film you have to get right,” she said.