Nadine is currently appearing in the Belvoir St Production “Tell Me I’m Here”.

She was on 2GB today discussing the project.

On behalf of the site, I would like to wish Nadine a Happy Birthday and I hope she has a fantastic day!

Nadine has teamed up again with George Adams, creator of The Doctor Blake Mysteries, with the new collaboration “The Forgotten Mysteries”

The Forgotten Mysteries is a curated compilation of tales by some of history’s almost forgotten female writers. Narrator, Nadine Garner. Producer, George Adams.

Posted in Uncategorized | Tagged the forgotten mysteries | Leave a comment

Nadine starred in the QTC/MTC production of Emerald City before it was cut short because of the lockdown / self-isolation laws.

Bloom Season Two has been released today – Nadine is in this season.

Nadine has been a strong voice in how the Arts Industry has been affected by the virus.

Firstly, I would like to apologise for the lack of updates. Due to real life I was unable to update the site.

On behalf of the site, I would like to wish Nadine Happy Birthday and I hope she has a fantastic day!

The Blake Mysteries review (no spoilers)

“A little advice if I may. You can spend your whole life focusing on the past or you can look forward, be grateful for the people you have and the time you have with them.”

When it was announced last year that the Seven Network had picked up ‘The Doctor Blake Mysteries’ for a series of telemovies the fans rejoiced.

Fast forward to a few months later and due to some off-screen allegations against its lead actor, it meant the show was suddenly in limbo. What would happen to the show and would it be able to move forward without its main character?

If ‘The Blake Mysteries’ is anything to go by, then the answer is yes.

I’ve been a fan of Nadine Garner’s since childhood, that is no secret, but what ‘The Blake Mysteries’ is for Australian television is finally having a leading lady of murder mysteries (I’m excluding Essie Davis in ‘Miss Fisher’s Murder Mysteries’ here, since her character is deemed younger than Nadine’s in ‘The Blake Mysteries’), like they have in British productions with Miss Marple and the United States had with Jessica Fletcher. Albeit, even if Mrs. Jean Blake is younger than those characters, like her missing in action husband Lucien did in The Doctor Blake Mysteries, she has a tendency to sniff out the truth when something seems not right.

Of course, fans that would love to see the characters of Lucien and Jean on screen together might be disappointed, but the creation of George Adams has not lost anything with this new production (thanks to writer Paul Jenner and director Ian Barry).

If there are to be future instalments, the new characters that are introduced in this telemovie are ones that can grow. Plus we are still blessed with the favourites from ‘The Doctor Blake Mysteries’ series in Matthew, Alice, Bill and Cec, who will always have Jean’s back when she needs it and vice-versa from her to them.

So in the end, this is a new instalment or a spin-off from ‘The Doctor Blake Mysteries’, but still has the same tone of its predecessor.

Whether there will be more instalments after tonight’s telemovie is still to be determined, but I for one wouldn’t be totally against seeing more.

‘The Blake Mysteries’ will have its premiere on November 30, 2018 on the Seven Network.

I have attached scans from today’s The Sunday Telegraph (and News Limited affiliate papers) and also the media kit for the tele-movie. 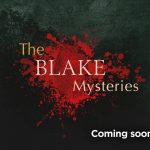 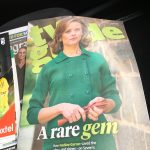 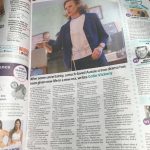 Seven Network released a sneak peek of ‘The Blake Mysteries’.

After making its debut at the Melbourne International Film Festival, ‘Celeste’ will screen at the London Film Festival in October.